All 4 issues of the zine are still in print. 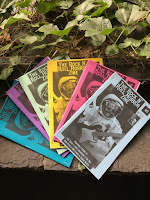 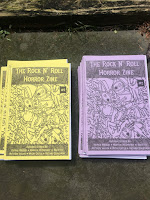 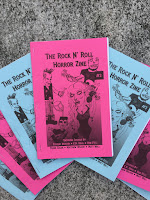 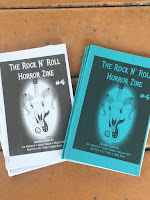 Or order from anywhere in the world here: https://www.etsy.com/shop/BenFitts666

You can also mail order by sending cash and a note containing a shipping address and which issues you would like to receive to:

Popular posts from this blog

End Times at Rock ’n’ Roll Joey’s By Madison McSweeney There were about eight of us left, after it was all over. Me, Mallory, and Brent, and Fred and his three goons. And then there was Rock’n’Roll Joey. Eight of us, then, plus the cooks – but they weren’t really… us , anymore, ya know? The day we crawled out of the fallout shelter, the ground was still slick with a green goo. When we stumbled upon the last surviving strip mall, Fred took a crowbar to the door of the Dollarama, opening up an oasis of non-perishables and soaps. We had it pretty good. It was Brent’s idea to scope out the diner next door. The Rock’n’Roll Joey’s was connected to the Dollarama, on the very edge of the strip mall; Brent figured they might have some edible food lying around, and with any luck, a working oven. The front door was stuck tight, so we went around the back, and Fred once again forced the door open with that crowbar. As we crossed the threshold, I was surprised to hear the soft sou
Post a Comment
Read more

The Riffmaster General by Ben Fitts

The Riffmaster General by Ben Fitts Lilith trembled as she plugged her Gibson Explorer into the massive Orange stack on the stage. Of course, her guitar wasn’t really made by Gibson and the amplifier wasn’t really made by Orange. They were just clones of the original brands. It was possible that those companies still existed back on Earth, but Lilith thought it was unlikely. Ever since the United Nations Of Earth ordered the exile of all metalheads from the planet, citing their presence as a danger to religious freedom and Christian values, the gear manufacturers must have been hit pretty hard. Lilith thought Fender was probably fine, though. The decision had no impact on indie rock bands or country singers. Everyone from the village was there watching her, sitting solemnly in their ceremonial patch jackets and bullet belts. She was able to make out her parents in the dim blue light shining on the audience. They sat front and center by the stage, as was customary fo
Post a Comment
Read more